*: The 8-foot Praetorius set is only available along with the 4-foot set. 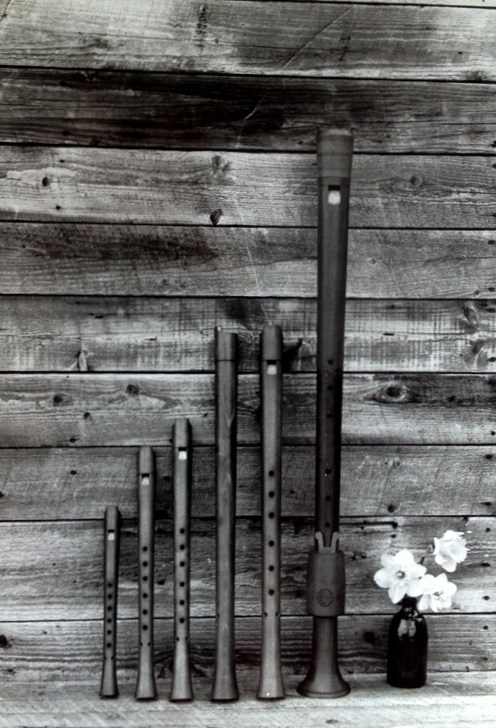 Prices are towards the high end of the market, and change each year with inflation. Delivery times vary: the early baroque flutes are the most popular, the flauto doppio the least. The big 8+4-foot set is usually available without wait.

When I made renaissance recorders based on the measurements of the Vienna collection, I was amazed how strongly they interacted with 16th c. harmonies. The respect I learned for the instrument-makers of that time transferred as well to an exploration of how the music might have been performed, using contemporary writings and what suggestions the music itself gave.

These recorders seem so special for the music, mostly from their inner shape, which roughly follows the outside, thinnest​ about 3/4 the way down. This gives less 8ve in the timbre of the sound, but a strong 12th (baroque recorders have progressively sharper resonances up the harmonic series). As the 8ve is generally given by other voices in counterpoint, and tends to opaquely hide them, this gives a powerful but clear sound in choirs. The basic quartet was Fccg, but how should a larger ensemble be disposed? Ideally, the sizes should be in 5ths. You could make a series from FF to aa, and play any three neighboring sizes, but as the distance between them increases, so does the difficulty to play them together; the repertoire for flutes a 3rd apart is limited. Or you can duplicate the basic quartet an 8ve lower; one musician said recorders could be played like an organ, which could mean doubling voices at the 8ve, a very impressive sound. In the basic 4′ quartet, for larger ensembles, I’ve added sizes in f and cc, which seem the most useful.

The harmonies of the 16th c. are associated with the term from a 15th c. French poem, “contenance angloise,” describing the new, sweeter harmonies from England. But what instruments to use for other, earlier renaissance music? There are many pictures of outwardly cylindrical recorders, but no real examples. I tried some, cylindrical inside as well, and found they worked well for such music, especially Italian, down to the trecento. Music was generally only two or three voices, so the stronger 8ve in the sound is no problem, and makes a sharp, intense effect. A problem with cylindrical recorders is that the 8ve from the 3rd to 10th notes is progressively smaller with increasing sizes. An f flute seems to be the limit, but I have cheated a little with a small expansion of the bore about the thumbhole to help this interval. In these duos and trios, the smaller sizes work well and accord with pictures. I tune some of them Pythagorean, and some meantone, like the “contenance angloise” flutes. The Pythagorean work well in some trecento music, and the occasional 3rd that needs to be sweetened can be done with refingering. The role of 3rds in music is an interesting subject, with many nuances of how musicians regarded the interval, officially and in practice. Music for a long time was officially Pythagorean, with ditones tempered into 3rds in practice, but the sound of Pythagorean is stronger and more varied, sometimes too “strong” and vigorous. 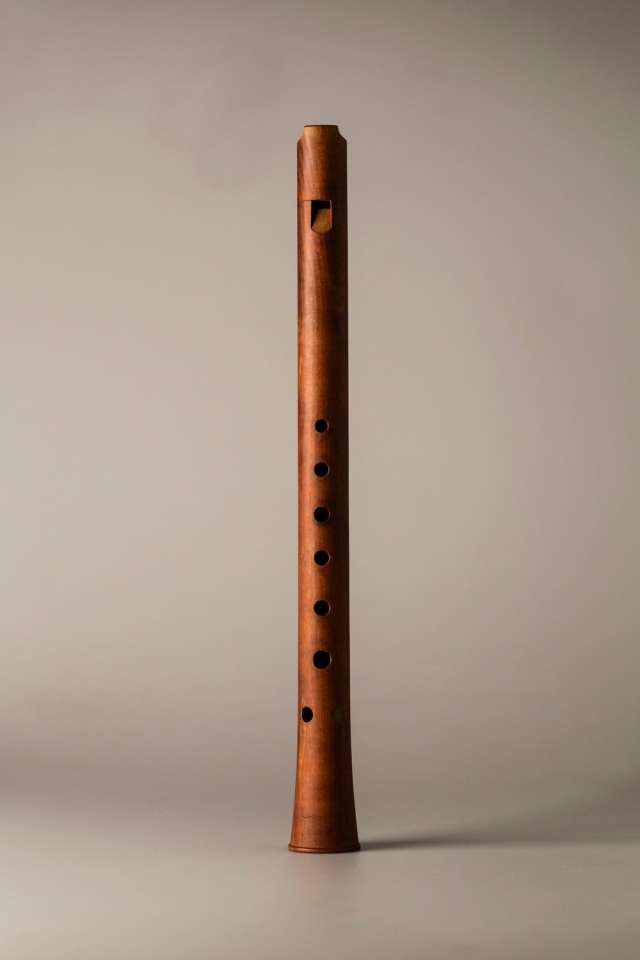 For the “solo” recorders, I made a narrower version of the normal tenor, which is not very agile, especially in the upper notes. I named it arbitrarily “Wollick” after a 16th c. music book, with some solo pieces suitable for such an instrument. Many other such “solos” (often with tenor accompaniment) are found in 15th & 16th c. music. The Ganassis are based only on pictures; the instruments in Vienna were perhaps more “normal” 16th c. types, rereamed and with bigger fingerholes to raise the pitch, which incidentally made their Ganassi fingerings more in tune, not so sharp. But the flutes in Ganassi’s book are differently shaped, with no “waist”; I finally saw one too many such pictures, tried the design, and found it worked, 20 notes with fingerings close to his. Without an outward “waist”, it seems unlikely the inside would be much more than cylindrical, but with a flare at the bottom, which raises the fundamental resonance to be more in tune with the upper ones. The fingerings are based on the overblown “harmonics” of the fundamental (a baroque recorder overblows the 4th “harmonic” to an f#), so the lowest note is even more 8ve-rich. Any “solo” piece of 15th or early 16th c. might be suitable, where a large ensemble makes no harmonic demands, but the vast repertoire of frottole, the common Venetian song of the time, seems most appropriate. They can be ornamented to any degree of virtuosity, and in Petrucci’s 6th book, some are already “diminished” to a demanding extent. 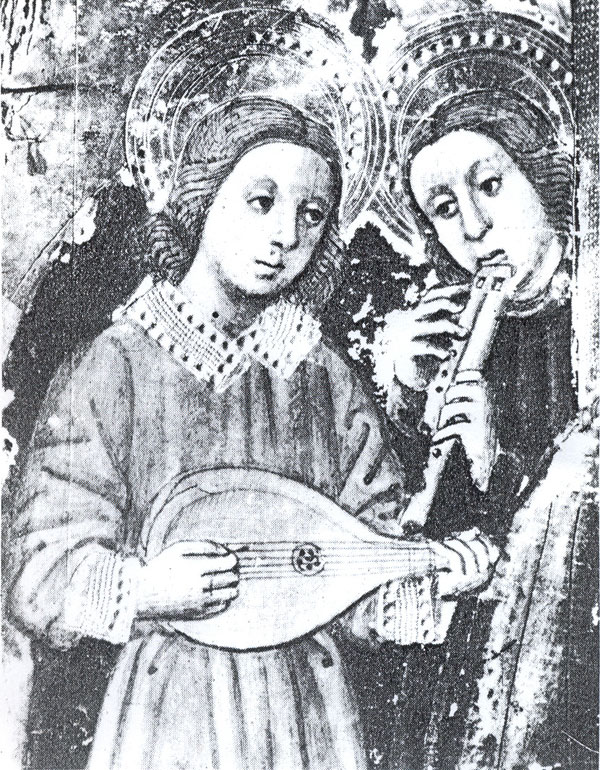 There are pictures of double recorders which don’t look like aulos imitations, but only one, in Oxford, exists. In early photos, it looks perhaps playable, but not now; it’s impossible to tell how it worked. I tried a larger version of it, with carefully spaced fingerholes to give more than an 8ve for the left hand. The only ready-made repertoire I’ve found a is 16th c. laude, but any melody could be harmonized appropriately.
Early baroque recorders seem similar inside to later ones, with less conicity, as the demands for upper notes is less.

As was said of a compromising British statesman, the recorder has perhaps “much to be modest about”; “toodle loodle poope” was its sound in the 16th c. The contrast between its basic character and an advanced style of playing can be interesting, but perhaps more rewarding is choosing instruments that directly relate to the music, and playing them in ways that represent how that music might have been performed. 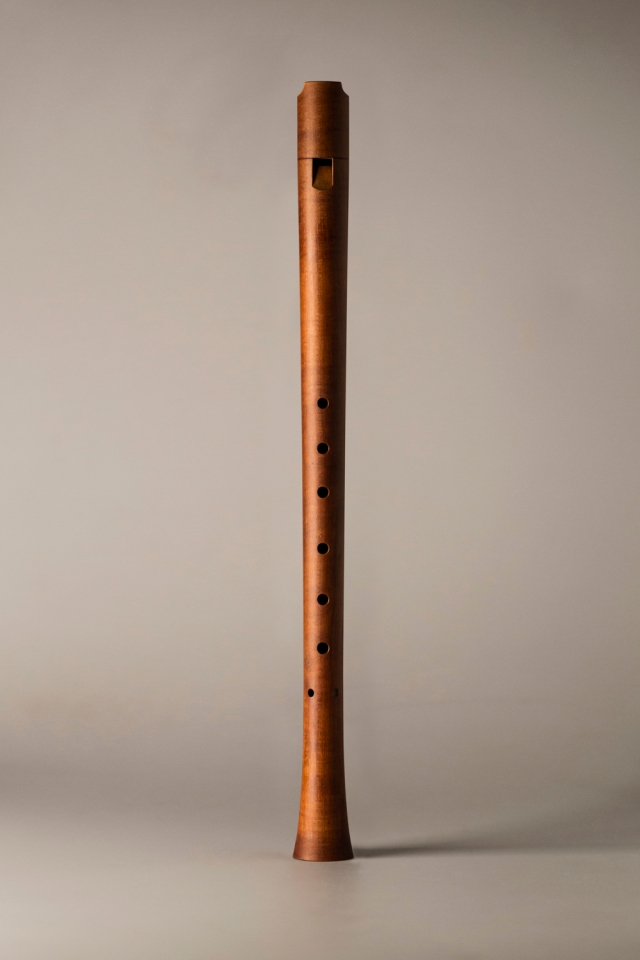 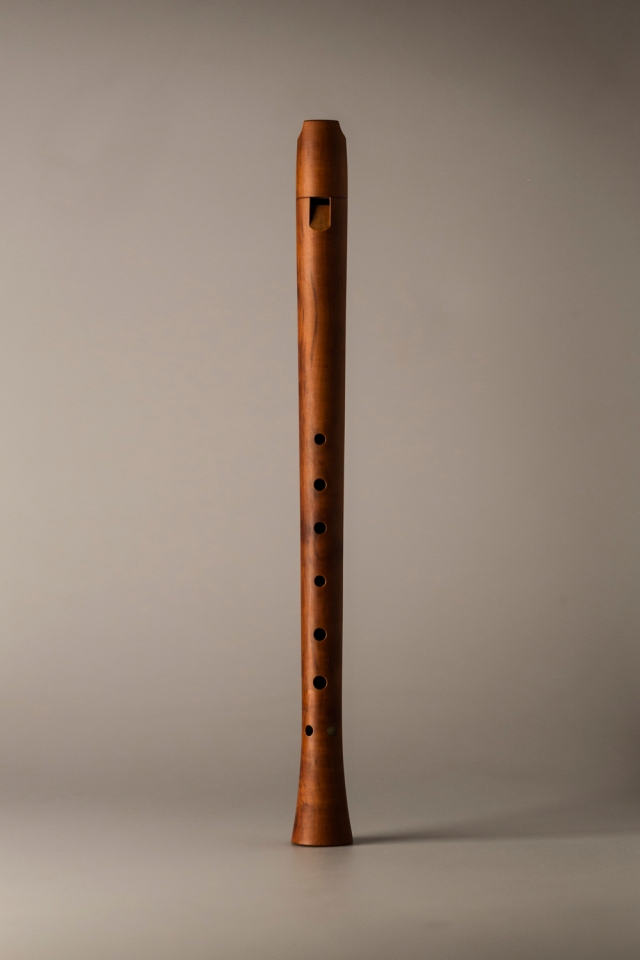